Well we did it. Julia let me talk to her class this year about Type 1 Diabetes.

In kindergarten I talked to the class. She didn't have much choice. She was at school one day and then she was  in the hospital for a week.  So when she came back, it just made sense to explain where she has been and what had happened.

One thing I have heard her saying is that she gets tired of the questions all the time. She doesn't like kids asking her what she is doing when she is checking her blood sugar or using her pump. She just didn't want to talk about it. So this year I tried telling her that I would do the talking and answer all the questions so she wouldn't have to. I told her that maybe if I explained things, the kids would stop asking her.  And then she got exciting news.  She was going to be the very first star of the week.  She got to make a poster all about her and she would get to share something in class every day.

As we were coloring her poster I asked what she wanted to bring to share.  Of course she had a plan for every day.  One of the things she wanted to bring was her Lenny the Lion.  We got Julia's' Lenny after Family Camp this year.  The president of Medtronic Diabetes came to visit camp and took the names and addresses of all the kids with diabetes at camp.  She then shipped each one their very own Lenny fully dressed and outfitted with a real pump, pump site and CGM sensor.

So Julia and I talked about if maybe on the day she brought Lenny, I could come too.  I would explain diabetes and the kids could all touch Lenny's pump so they wouldn't be so curious about hers.  She agreed.  So armed with a fluffy lion in a Hello Kitty shirt and tutu rocking a purple pump and a sweet girl also in a Hello Kitty shirt and tutu with a pink pump I was ready.  I also prepped by watching Misty's daughter's powerpoint .  It is a very simple straight to the point explanation about Type 1.  It was exactly what I needed and wanted. 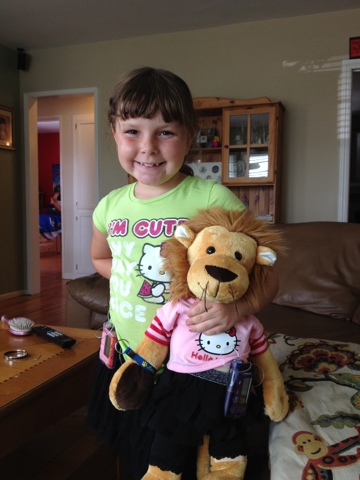 So off to school we went.  I was nervous and I could tell she was too.  When we got up in front of the class, she wouldn't even speak.  She was standing next to me but kept her eyes down.  I explained that type 1 diabetes just happens.  There was nothing she did or didn't do that caused diabetes. I explained that her pancreas doesn't work and that the pump is her pancreas.  She brought her eyes up and carried Lenny's pump over to the kids to be passed around.  I explained how she has to test her blood sugar and it is just so we know how to keep her healthy.  I talked about how she can eat anything and do anything.  She was smiling and added how she went to Hawaii this summer.  I finished up and asked if anyone had any questions for me.  She would call on the kids and I would answer the questions.  By the time we finished, she was the one who was answering.  I closed by telling the kids that if they ever had any questions about diabetes they could ask me anytime.