Well it has happened, we have used glucagon. Thankfully it wasn't as harrowing a situation as it could have been. Typically glucagon is used when a pwd has such a low blood sugar that they are unconscious and unable to intake any fast acting sugar. Julia was never unconscious and I am very thankful for that. But it has definitely been a very long few days.
It all started Saturday morning when Julia woke up with a stomach bug. This was not our first encounter with type 1 and stomach issues so I was ready to spend a long day testing BGs and having her sip on high carb drinks. We camped out in bed with Disney sitcoms, Gatorade, 7-up and a whole lot of test strips. The day was passing without anything too dramatic.
Joe needed to get to batting practice before his game so I drove him over while Bubba took a turn with flu watch and got dressed for the baseball game. Bubba was going to be heading over to Joe's game and then heading to work for the night. I came back home and did another bg check along with a ketone check. High bg and ketones can be very dangerous. Julia's bg was in range but her ketones started to rise from trace to moderate. Now the best cure for ketones is insulin and lots of fluids. The problem was Julia's blood sugar was hanging out at about 97 and there was no way to force lots of fluid because one sip too many and we were on the express train to pukeville. Right about then, Bubba got a message that Joe threw up at the ball field. Seriously. He left to go check things out and bring Joe home. When he arrived Joe was doing much better and thought his lunch did not agree with him. The game started with Joe in the outfield. The game ended quickly for Joe when he christened the field with his stomach contents.
For those of you keeping score at home, we are at two sick kids and a husband on the way out the door to work.
Bubba left. Luckily it was just Joe's lunch not agreeing because he was fine the rest of the night. For Julia the outcome was not as rosy. She wasn't holding anything down and the ketones kept rising. Ketones can develop when a person hasn't eaten, any person not just a person with diabetes. She kept getting more and more listless. I had been in contact with her doctor. He said at this point the choice to go to the ER was mine or I could try to stay at home a little longer. I really didn't want to go to the hospital unless we really needed it. I watched her number stay steady and the ketones climb and then stay right where they were. No longer moderate.  They were large. She was more and more out of it but I kept slipping in fluids and then poof, she snapped out of it. The ketones started to clear up and my little girl was back.
Sunday we stayed quiet. She didn't throw up at all. We battled back the last of the ketones. She was worried about Monday. She was worried about having to go back to school and eat the food she was supposed to eat in the time allotted her.
Bubba and I had another plan in store. Joe turned 10 on Friday but Bubba had to work all weekend. We decided to take the kids out of school and go to the Lego Store and to lunch.  That would also take care of Julia's nerves about eating within the school's scheduled time.  We had a great day.  Joe was in heaven at the Lego store.  We had lunch at the ESPN Zone.  Julia didn't eat a ton but she ate and everything seemed okay.
We made it home in time to get to Joe's baseball game.  Julia ate her dinner there, not all of it but still she seemed to be on the mend.  Joe's team won. Woo Hoo!  We came home and everyone went off to bed.  I checked Julia at 10:45 and she was 76.  She said she was feeling shaky so I gave her a juice box.  Fifteen minutes later and she said she feels like she is dropping and her stomach is hurting.  I checked her number and grabbed a bowl 72 and a whole lot of yuckiness later, she says she feels horrible and she can tell her number is dropping.  Click, poke, wait...62.  We were out of options. I opened the glucagon and prepped for a mini dose (you can read what that means HERE).  Twenty minutes later she was 139 and easing off to dreamland.  I spent a long night checking and watching.  She woke bright and early this morning and spent the day resting today.  No more throwing up.  She is happy and although not all the way back to normal, she is doing pretty darn good.
I, on the other hand, have been on the verge of tears all day. The glucagon itself didn't scare me but I have lost a security I have held since her diagnosis.  Every time I explain to someone what glucagon is or talk to a newly diagnosed family who has the fear of an unconscious child in the forefront of their mind I could always say, "We have never used it." It was always just the back up plan, the worst case scenario.  I know we did not have to use it in the way it would have been to be the worst case.  But we have used it, I can  no longer say never. 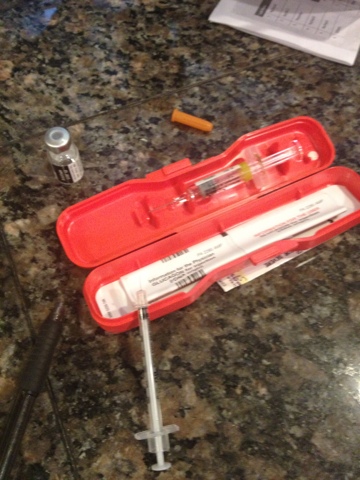 I am in no way a medical professional...I only share my stories.  Please do not take anything I say as medical advice.
Posted by Diane D at 6:17 PM